Aluminum is a metallic element with a valency of +3. It is the third most abundant element in earth’s crust. Despite the fact that aluminum is not an essential nutrient, it has an agronomic importance since it is considered toxic to plants. Aluminum was found to be the most limiting factor for crop yields in acidic soils. However, there is some evidence that it also has some beneficial effects.

Aluminum is present in soils in several forms, mainly in mineral forms such as aluminosilicates (e.g. feldspars, kaolinite) and  aluminum oxides (e.g. gibbsite). It is released from primary minerals during weathering and precipitates as secondary minerals. Because of it’s positive charge, aluminum binds to soil particles, particularly to clay particles and organic matter (the exchange complex).

Aluminum becomes soluble in acidic soils. Therefore, at pH below 5.5, the concentration of aluminum in the  soil solution increases. Its predominant and most toxic form  in the soil solution is Al(H2O)63+, commonly referred to as Al3+. Tropical soils and forest soils are usually acidic and, therefore, have a high concentration of soluble aluminum.

Despite the said above, some of the aluminum in soil may bind to different ligands in the soil solution and becomes less toxic.

An aluminum concentration of 2-5 ppm is considered toxic to many plants. The effect of aluminum toxicity is first detected in the root system, where aluminum is absorbed. Aluminum reduces root cell division and, therefore, inhibits root elongation. Root tips become deformed and crispy. In addition, it inhibits the enzymes responsible for the deposition of sugars in cell walls, reduces the formation and transfer of cytokinin, reduces DNA formation, and changes the structure and function of cell of membranes.  This change in cell membrane restricts water  and nutrient uptake and transport.

Therefore, aluminum toxicity might induce nutrient imbalances and restrict the uptake of nutrients such as calcium, magnesium phosphorus, potassium, manganese, iron, and zinc.

Symptoms of aluminum toxicity in the leaves and stems may include stunning, necrosis of leaf tips, small, dark leaves and purpling of stems. Symptoms of calcium deficiency might also occur and include curled young leaves and death of growing points.

Research conducted on plant tolerance to aluminum toxicity has shown that some plant species have developed resistance to aluminum toxicity and can exclude aluminum from their root tips. In this mechanism, plants release organic acids, mostly citrate, malate, and oxalate, to neutralize the toxic effect of aluminum. These organic acids form non-toxic complexes with the aluminum. Citrate and malate exist in all plant cells as they are responsible for the mitochondrial respiratory cycle. Oxalate is a predominant cellular constituent associated with ion balance, Ca2+ regulation, and metal detoxification.

Some tolerant crop species can absorb nutrients, such as Ca and P,  more efficiently than non-tolerant species.

In addition, there is some evidence that small concentrations of aluminum may play a positive role in the development of some crops. However, detailed information is still lacking. 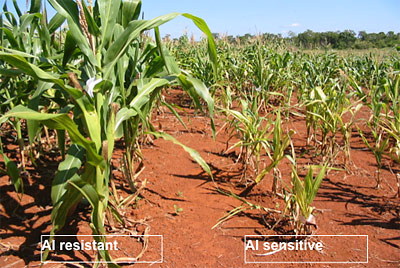 How to avoid aluminum toxicity